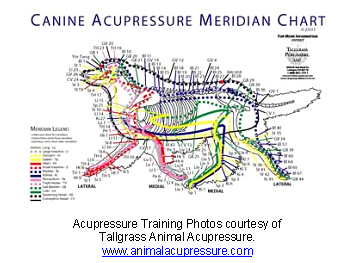 Acupuncture may be defined as the insertion of desired healing effects. This technique has been used in veterinary practice in China for at least 3000 years to treat many ailments.

Modern veterinary acupuncturists use solid needles, hypodermic needles, bleeding needles, electricity, heat, massage, and low power lasers to stimulate acupuncture points. Acupuncture is not a cure-all, but can work very well when it is indicated.

Modern research revealed that acupuncture points are located in areas where there is a high density or free nerve endings, mast cells, small arterioles, and lymphatic vessels. Studies indicate that the stimulation of acupuncture points induces release of beta-endorphin, serotonin, and other neurotransmitters.

According to ancient Chinese medical philosophy, disease is the result of an imbalance of energy in the body. This energy is called Qi or “Chi”. Acupuncture is believed to balance this energy and, thereby, assist the body to heal disease.

In Western terms, acupuncture can assist the body to heal itself by affecting certain physiological changes. For example, acupuncture can stimulate nerves, increase blood circulation, relieve muscle spasm, and cause the release of hormones, such as endorphins (one of the body’s pain control chemicals) and cortisol (a natural steroid).

For small animals, the insertion of acupuncture needles is virtually painless. Acupuncture is one of the safest forms of medical treatment for animals when it is administered by a properly trained veterinarian. Side effects of acupuncture are rare, but they do exist. An animal’s condition may seem worse for up to 48 hours after a treatment. Other animals may become sleepy or lethargic for 24 hours after acupuncture. These side effects are most often followed by an improvement in the animals condition.

The length and frequency of acupuncture treatments depends on the condition of the patient and the method of stimulation that is used by the veterinary acupuncturist. A simple acute problem, such as a sprain, may require only one treatment, whereas more severe or chronic ailments may need several or several dozen treatments.